Today was the least enjoyable day of the holiday so far. It was raining when we left Exmoor Bed and Breakfast. This made driving a little more difficult. It had been decided that we would take a detour from the original plan for the day and visit Bridgnorth because it has a railway between the two sections of the town which are separated by high cliffs. When we got there, it was very difficult to find the station. Eventually, I asked "Siri" for help and she led us directly to the station via a dead-end, one-way (at a time) lane way which meant I had to back the car down the laneway. It was the width of a small driveway in Australia and it had shops and pedestrians on both sides. It was a LONG WAY from fun!

We then parked the car and walked to the station. The fare was £1.60 return, quite reasonable. The train ride takes about 1 minute (yes ONE minute) down a very steep track. The single carriage has been designed in such a way that it remains horizontal as it travels along the track. Not bad for 1892! 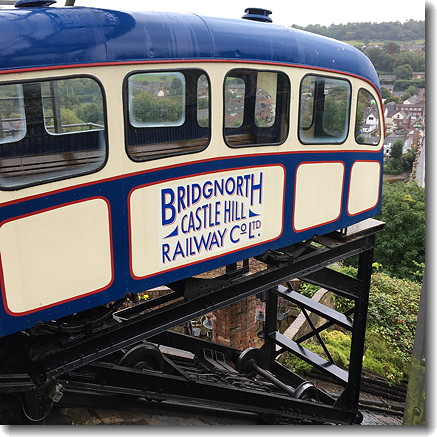 It is not really very clear from the above panorama photo but the railway on the left and the path on the right are at the same level. The train descends to the level of the buildings in the centre of the photo.

From Bridgnorth we drove to Shrewsbury Abbey (pronounced Shrowsbury). This abbey was founded by Earl Roger de Montgomerie who arrived in England in 1067, one year after William the Conqueror. Although the current church is only the back half of the original, it is largely intact. 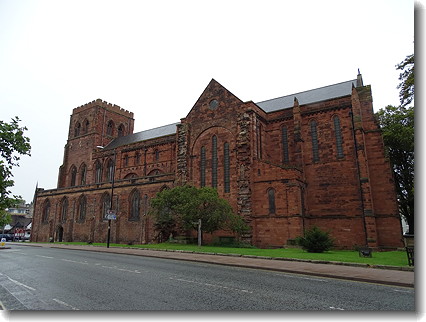 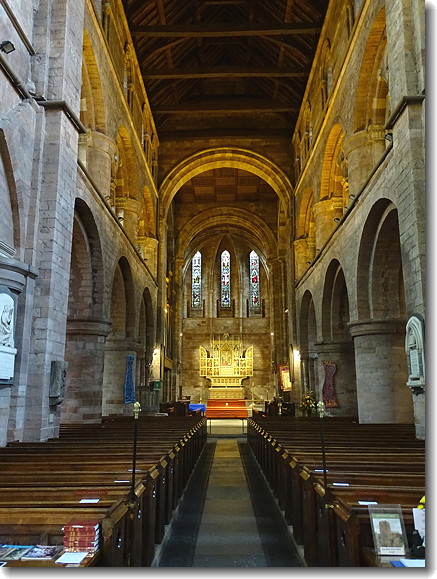 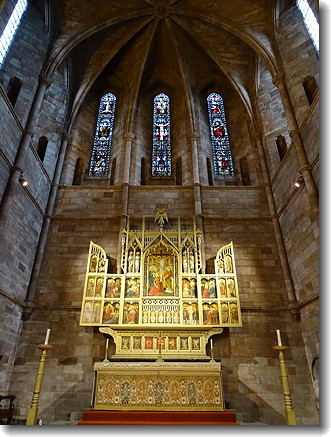 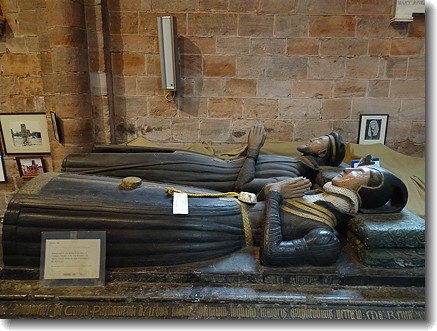 Effigies within the abbey. They had been moved at sometime in the past from another church. 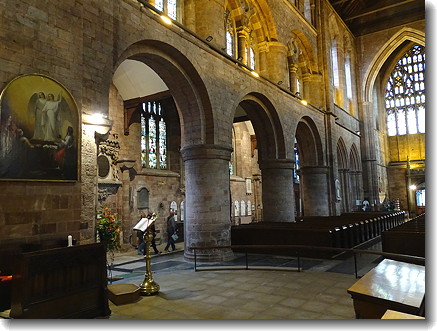 These Norman arches are original, built around the year 1090. 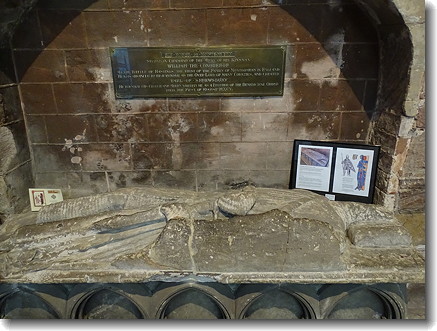 The tomb of Earl Roger de Montgomerie who founded the Abbey. He died in 1094. His effigy has suffered much through the ravages of time.

From Shrewsbury, we headed towards Chirk Marina where were were to pick up our narrow boat. Unfortunately, we were now quite late. We had to be at the Marina by 4:00pm and we arrived with fifteen minutes to spare but without having purchased supplies. So Satoshi stayed to be given the instructions about the boat while I went to get some groceries. Things began to go downhill. At least the rain had stopped!

I found the little supermarket (part of the "Spar" chain) and managed to find most things I thought we would need. When I took everything to the register, they would not accept my credit card as I had to sign for the goods. This had not been a problem anywhere else. They were quite rude about it. I asked them if there was an ATM anywhere near." Yes," they said," just outside the shop but it hasn't been working properly for a week!" Sure enough, on walking outside I found another gentleman finding that his card was being rejected as was mine. Back in the shop there was no way they were going to accept my card so I just had to leave all the shopping there! Needless to say, we will not be purchasing anything from any of shop belonging to this chain of supermarkets! Fortunately, there was another little supermarket down the road. This one had an ATM that worked so I got some money out and then did all the shopping all over again - knowing that Satoshi and the staff member at Crest Narrowboats were waiting for me. On the way back, I got lost and went down the wrong laneway - another dead end but at least I could turn around this time!