It was hard to leave Aylton because there is so much to see and do in the area which we had not seen and done! For a start, I had found a book and associated website http://www.visitherefordshirechurches.co.uk which listed details of 91 churches. We hardly scratched the surface! Oh well, good to have a reason to go back! 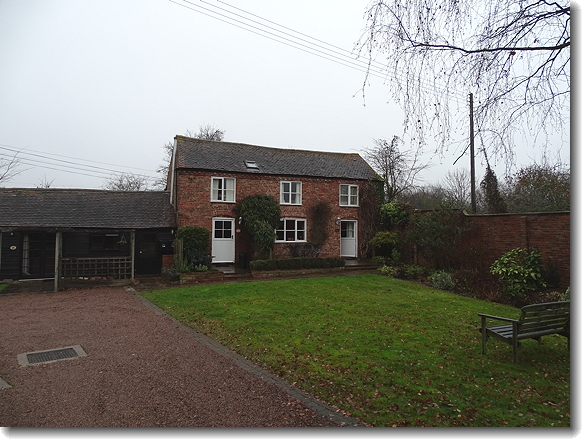 Over the last few weeks our car had become absolutely filthy on the outside (and not that much better on the inside) because of all the wet weather and mud. Satoshi found us an excellent hand car wash on internet so we took the car there. The hard-working "washers" did an excellent job and the charge was so cheap that I felt they deserved a tip. Further research undertaken by Satoshi gave evidence of a monastery which provided meals so we headed there. As we approached, the road became narrower and narrower, finally almost petering out to just a track. Was this really the way to a monastery? Yes, according to Siri. Then the bitumen ended and we were faced with a muddy and very rough track. The undercarriage of the car was scraping the mud and there were enormous potholes. So much for a clean car!! It was not possible to turn around so we had little choice but to go on. After what seemed like ages (but probably wasn't) we arrived at a deer farm? Really? Having arrived and seen signs offering food, we went in to be greeted with "Oh, sorry, there's no power. We can't even offer you a cup of tea!" Great! But wait... there was a bitumen road in sight and other buildings. Yes, the monastery! We found a very nice cafe with lots of books and cds to buy. And also... 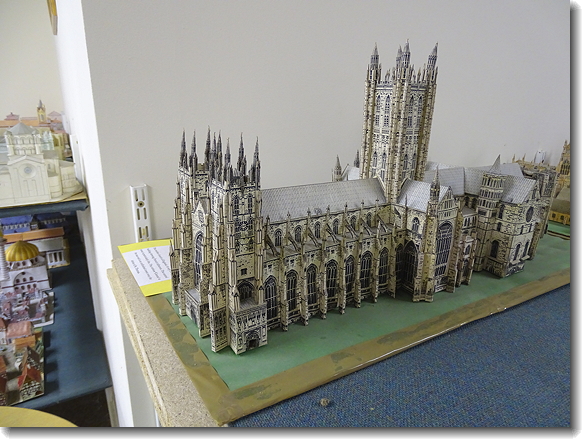 A model of Canterbury Cathedral, 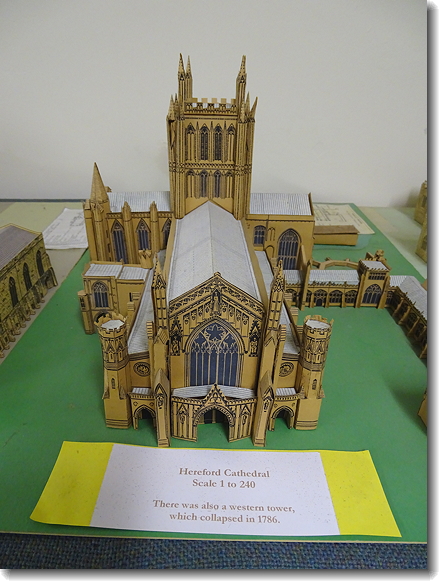 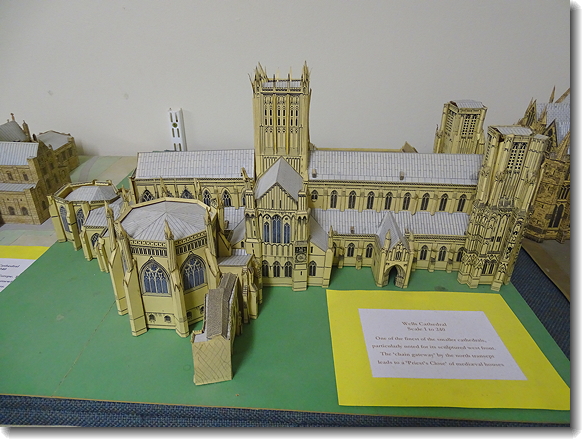 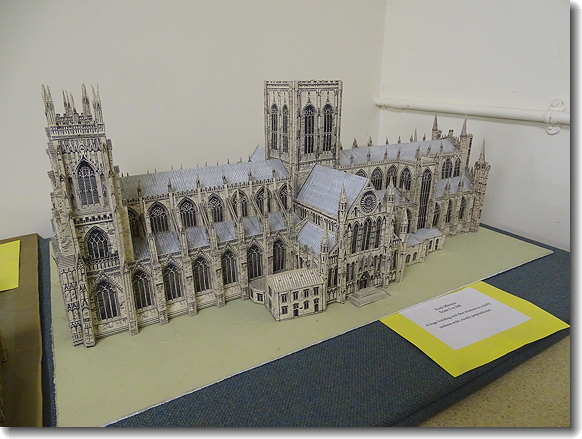 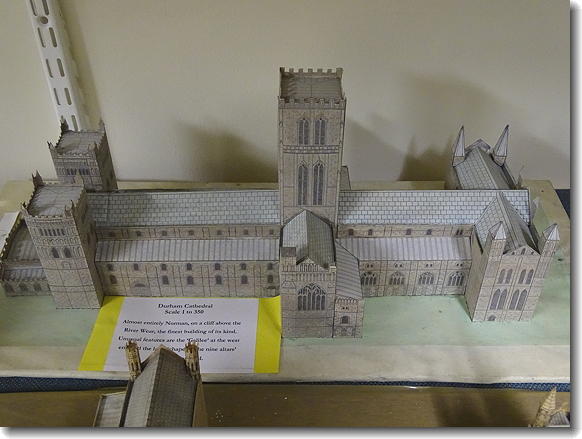 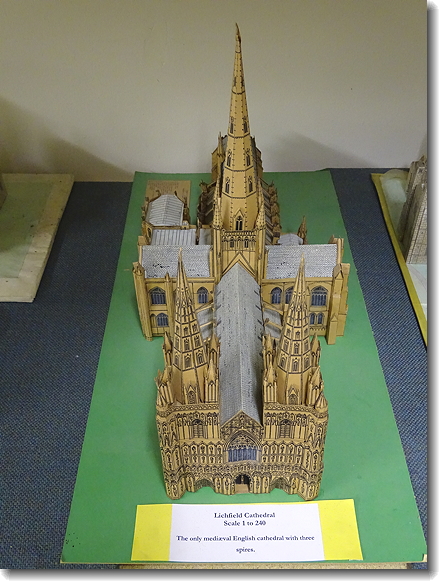 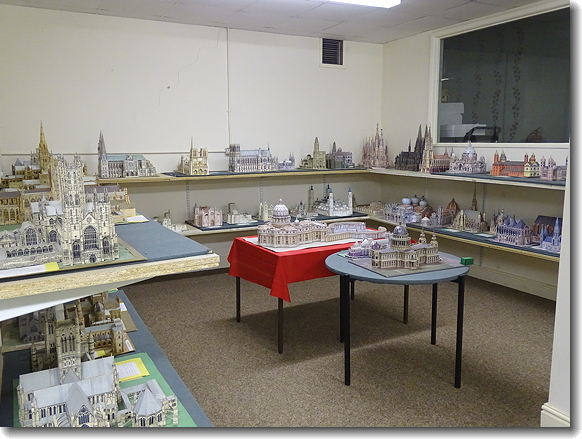 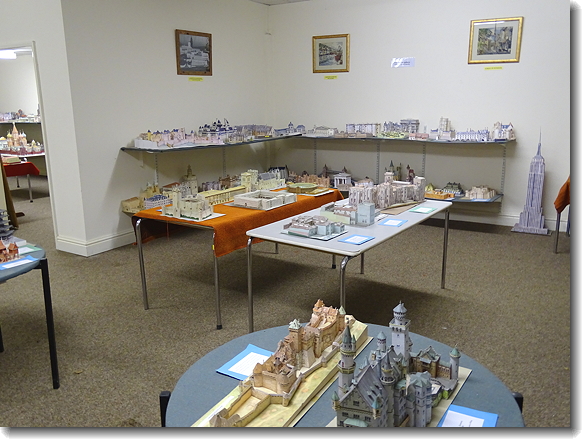 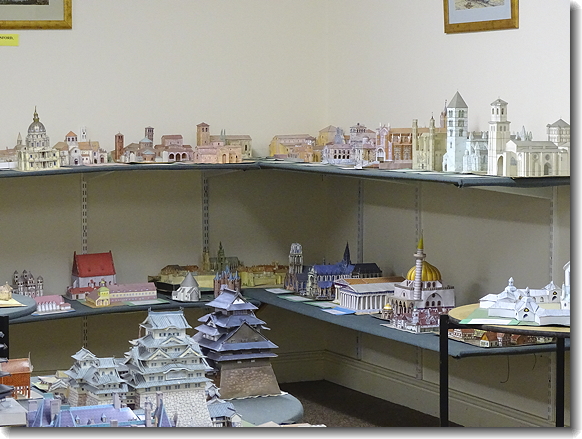 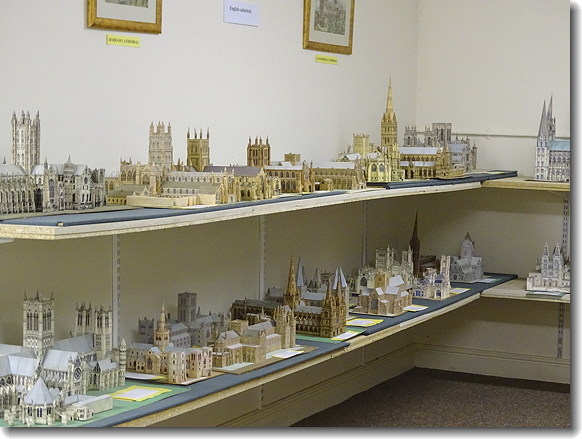 and these... (some of which are above) 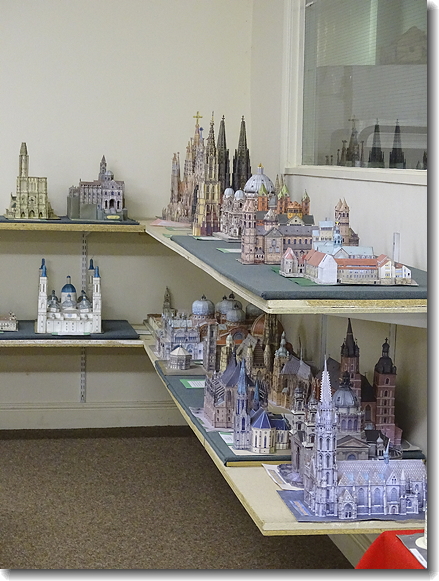 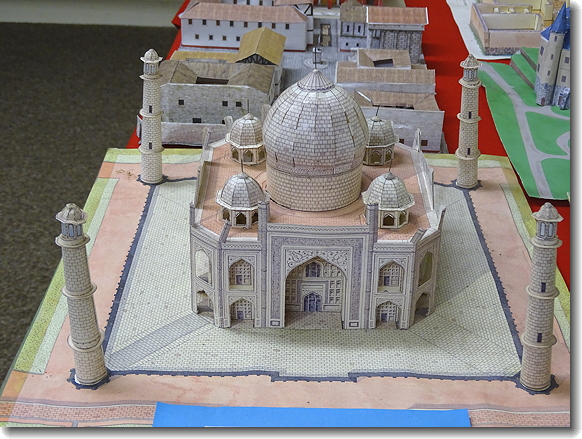 and even the Taj Mahal!

There were about five rooms of models in all, each model constructed by a Mr Bartlett who has made it his hobby to purchase and construct model building since 1988. Some of the models contain more than 700 parts. Amazing! The buildings (the real ones) open to us were not interesting on the outside and the actual monastery was not open so we didn't take any more photos and headed off on a smooth, bitumen road! Oh Siri!!!

We arrived a little early at our accommodation in Miserden (a town of only 420 people). We knocked at the door but there was no response so we left the car and went to have a look at the church. Our accommodation was the old vicarage so it wasn't far to walk! 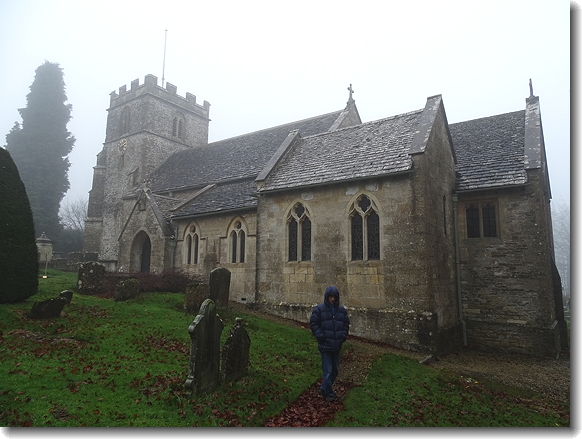 St.Andrew's, Miserden. As you can see, it was cold and misty. 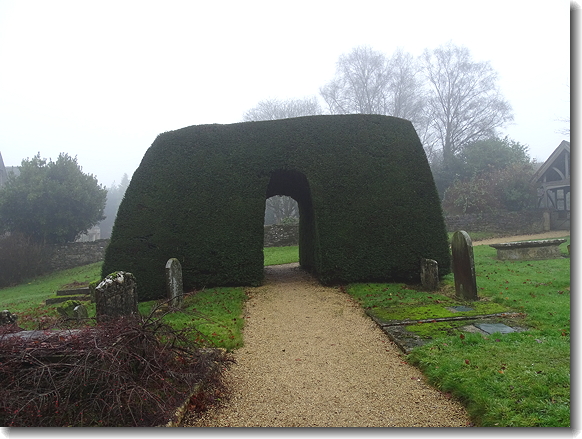 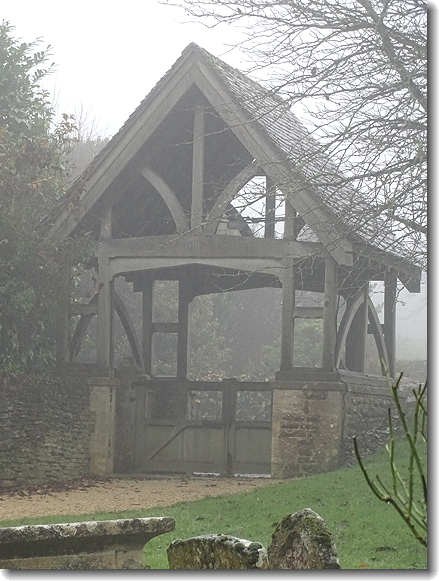 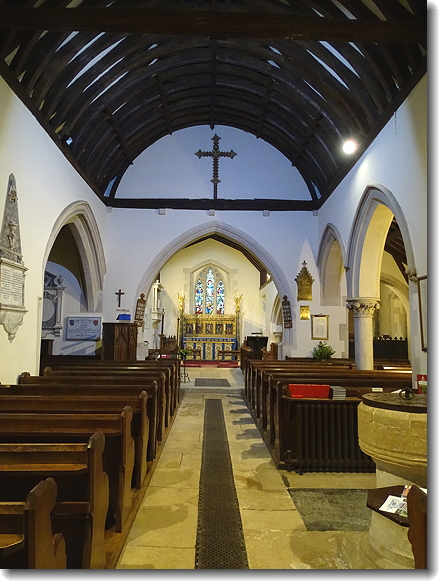 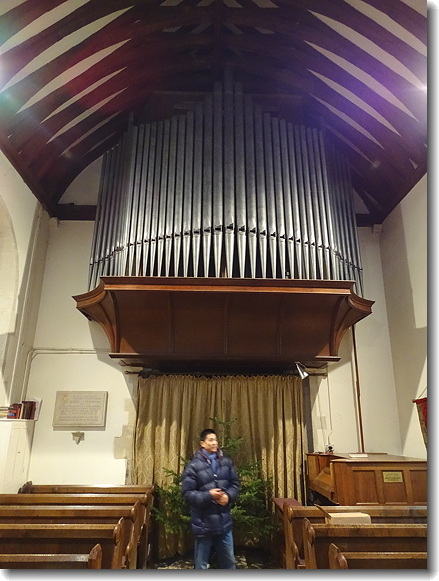 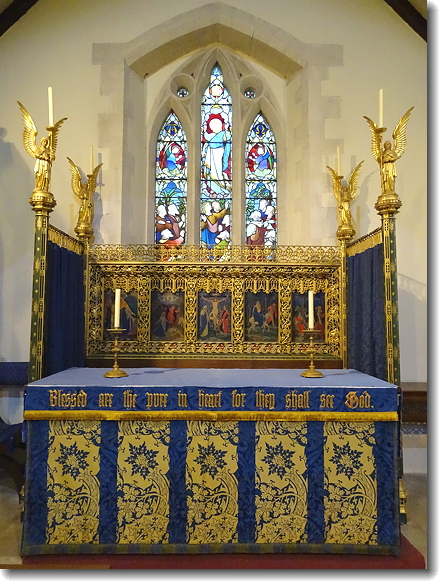 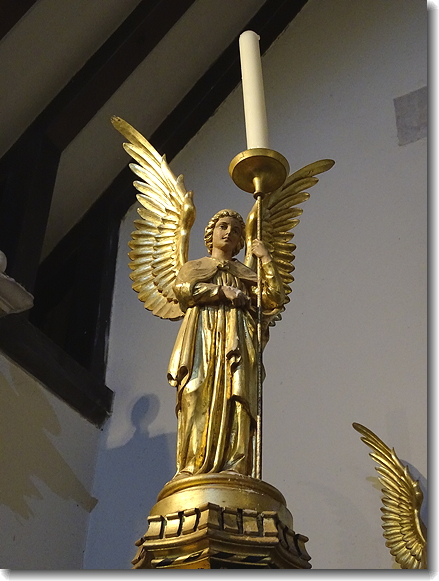 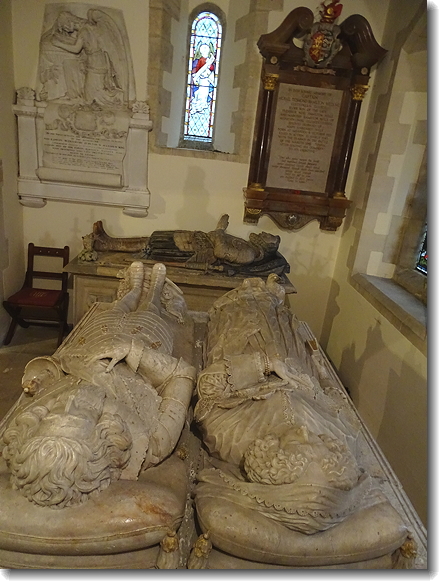 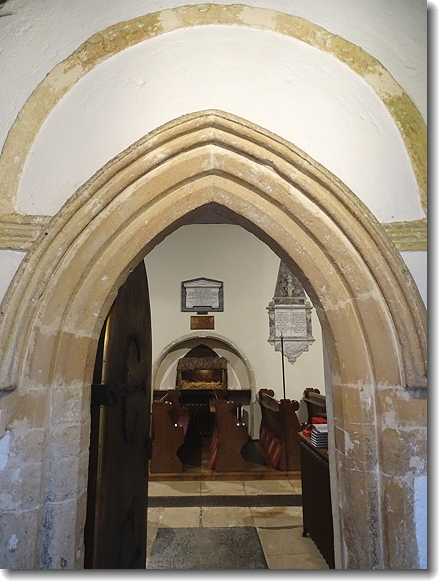 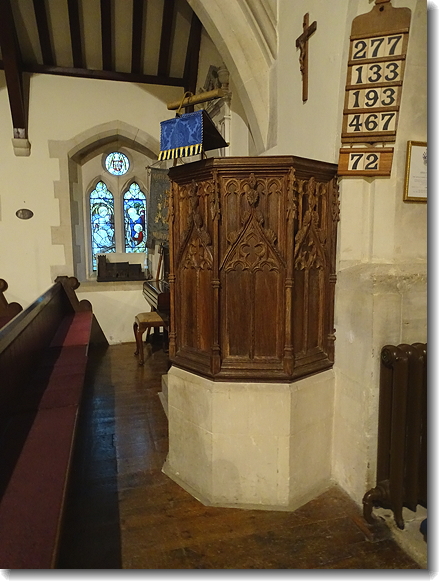 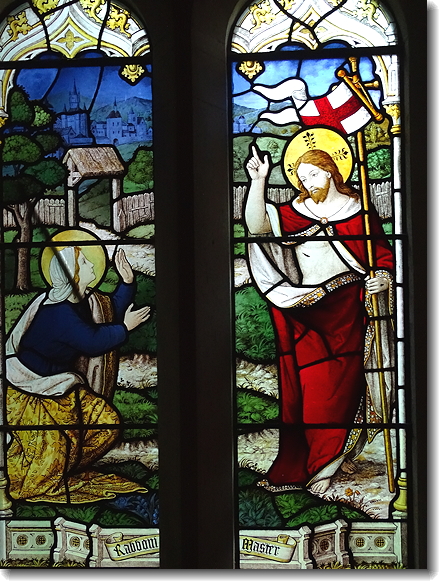 Mary Magdalen realises that the "gardener" to whom she was speaking was the risen Jesus. 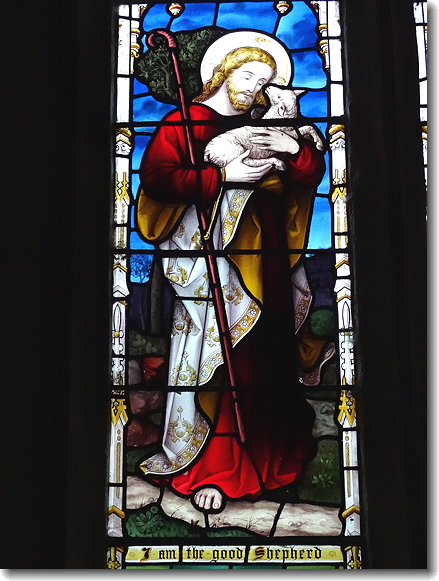 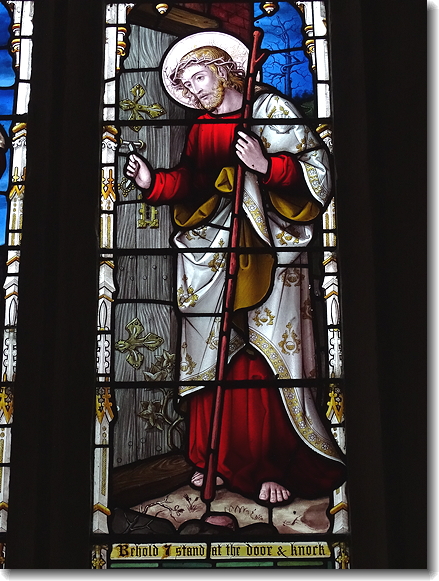 "Behold, I stand at the door and knock"

When we returned to the house, we could still not raise anyone by knocking so we rang the provided number. This time we met with success and a teenage girl appeared at the door. She took us upstairs to our room and found that the beds had not been changed. Her mother had forgotten we were arriving! We were hastily bundled back downstairs and she invited us into another room. She entered but the door was closed in front of us! The girl's sister was asleep on the couch. We smiled as we listened to the urging of the first girl to get the other up and out. "There's guests, Mum's forgotten, get up!!" After a short pause, we were ushered inside where there was a lovely, warm open fire to welcome us. A cup of tea was provided and Satoshi and I settled down to work on our journals. In due course, "Mum" arrived, full of apologies. She made us feel very welcome and I was given permission to play the grand piano! We had planned to visit the local pub that evening for dinner but learned from our host that it would be full. She kindly rang around and found us another pub where we could have dinner. This was the Crown Inn at the nearby town of Frampton Mansell. The roads in the area are incredibly narrow and the weather was very misty, making the drive quite stressful. The meal was welcome after we finally arrived safely and found somewhere to park.