After circling around the airport for half an hour, the plane finally landed at Heathrow about 8:00am. The second leg of our journey was, again, uneventful. The plane was as comfortable as could be expected and the food was pretty good overall. We had to line up for nearly an hour in order to have our passports checked. After that, however, we were out of customs within five minutes. They were not interested in our luggage at all.

We were collected from a bus stop by a Europcar courtesy bus which included a TV monitor which was advertising how fast one could expect to be out of one of their offices - almost no time at all! We discovered that the ad was somewhat optimistic. After about a half-hour wait we were called to the desk where we discovered that instead of the Ford Focus we had booked (and paid for) we were given a Mercedes A180 at no extra cost! 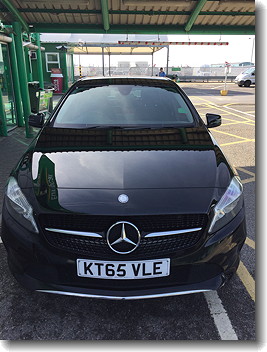 We were not given any instruction on how to drive it so we had to fend for ourselves. I couldn't even find the handbrake! One of the attendants grudgingly showed us and mentioned to expect that the motor would cut out when stopped at lights. Even armed with this knowledge it was quite disconcerting when this did indeed occur.

Out first trip was from Heathrow to our hotel (The Hilton Watford) - not without stress but at least we didn't hit anything! The hotel is older (shower over bath with curtain) but comfortable. We drove into Watford to find a shopping centre where we could purchase sim cards for our phones. We went to an Italian place for lunch (both had carbonara, a little on the small side but good).

The next drive was to St.Albans to attend Evensong at St.Albans Abbey. Again, the journey was quite stressful. There are so many roundabouts in England and people zoom around them at what seems like top speed. Not being able to find a carpark led to us being late but the Choir was very impressive. We were fortunate enough to attend an organ recital at 5:30pm by the Danish organist Bine Bryndorf. She played Preludio, Lauda, Preghiera and Fuga from Vesper Organi by Niels la Cour; Pastorale by Franck; Allegro and Choral from Symphony No.2 in E minor by Vierne; Scherzo and siciliano from Six Trios Op.47 by Reger; and Pssacaglia BWV 582 by Bach. 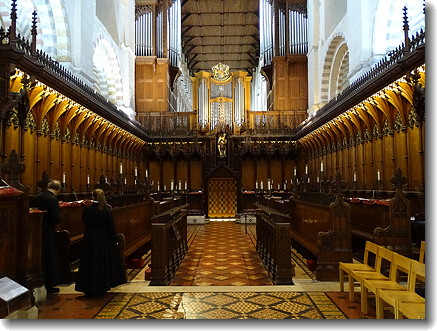 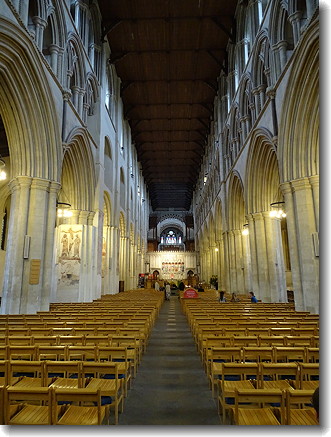 The body of a cathedral is called "The Nave" 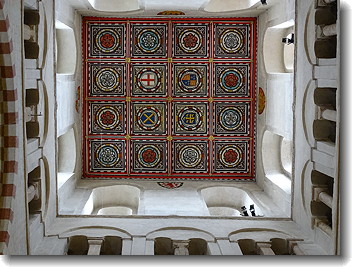 Part of the ceiling

After taking some photos we returned to our hotel. Next door is a restaurant called "Toby Carvery". We had an excellent roast meal of home-cooked standard for only £6.49 each (about $15). We have since discovered that this is a chain and they have restaurants all over England!

To my surprise, I found that I did not suffer from jet lag until about 7:30pm when I suddenly needed to go to bed!