As the morning Service we had decided to attend at Hereford Cathedral Matins was at 11:30am, We had a sleep in - I didn't wake up until 9:49am. When we arrived, there were a lot of other people leaving from the earlier service. We sat in the Quire with about four other people. 11:30am came and went with no sign of organ music or choir. I was beginning to think that I had made a mistake when the organ began playing and the choir processed in shortly afterwards. The music included the Venite (sung to Anglican chant), the Benedicite in G by Francis Jackson (which I didn't know but was great), the Benedictus in A by Stanford and the wonderful anthem This is the record of John by Orlando Gibbons. The organ voluntary was Nun komm, der Heiden Heiland BWV 661 by Bach. It was sad that so few people attended such a splendid service.

After the service, we had limited time to look around the cathedral before we had lunch (roast beef) at a local pub. 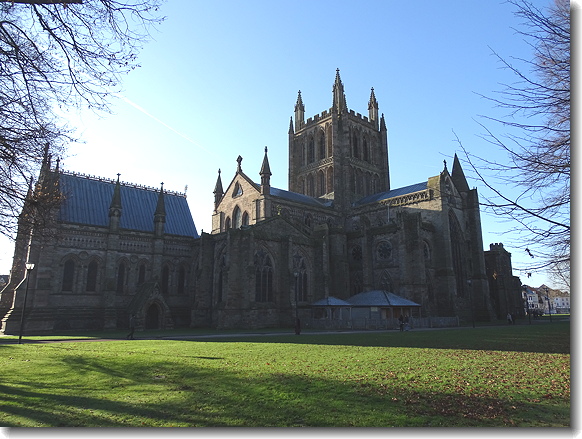 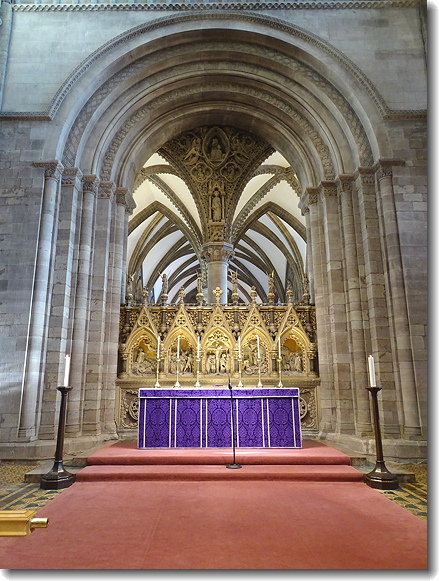 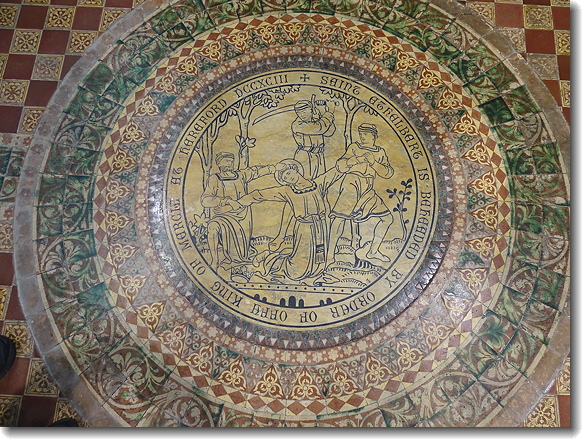 A brass on the floor in front of the sanctuary detailing the beheading of St.Ethelbert the King who, with St.Mary, is a patron saint of the cathedral. 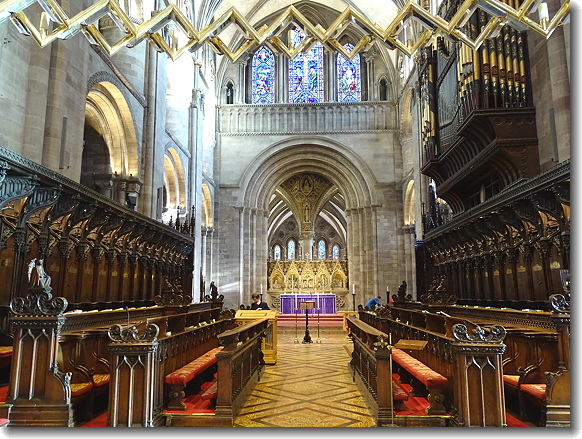 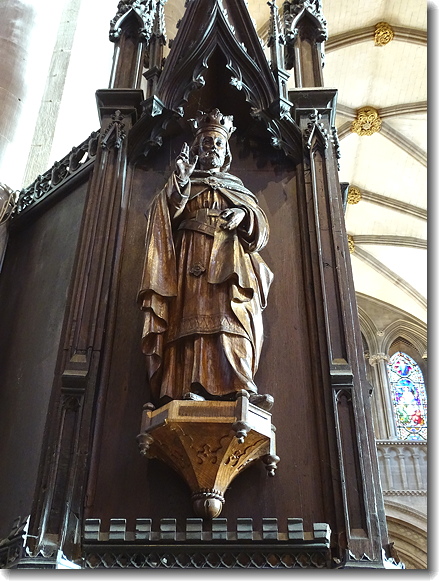 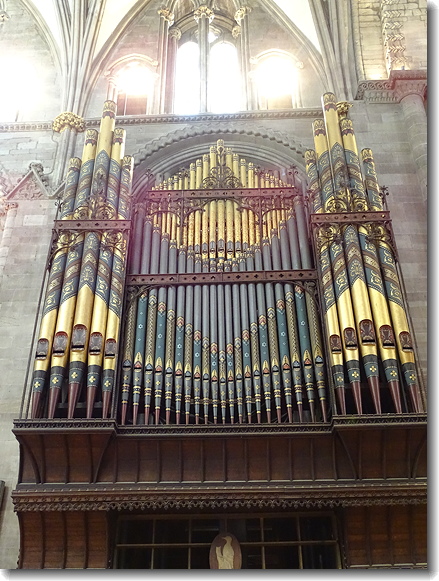 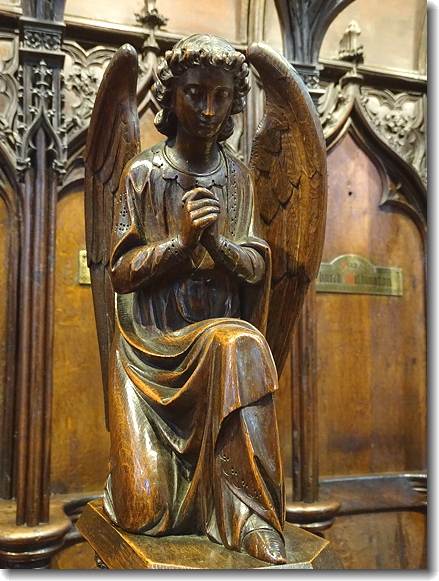 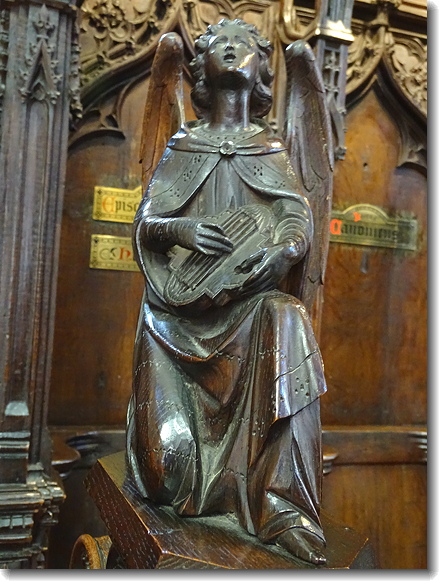 Two angels from the choir stalls. 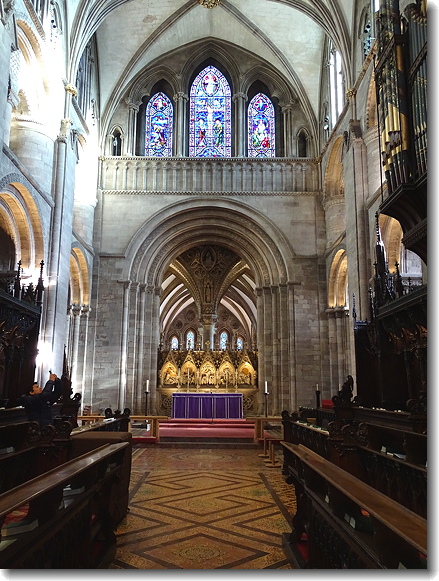 The Quire looking towards the sanctuary. If you look carefully, you can see the brass depicting St.Ethelbert on the floor. 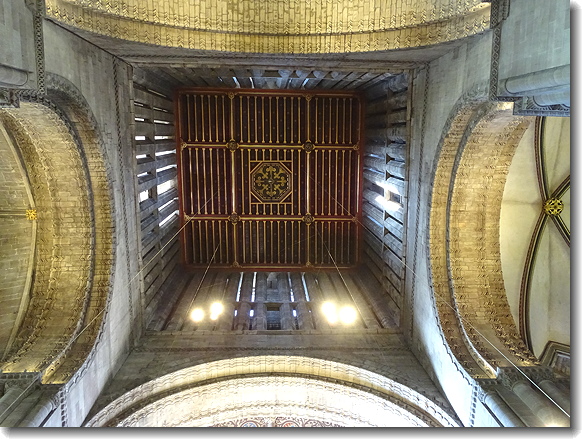 Looking up into the tower from the crossing 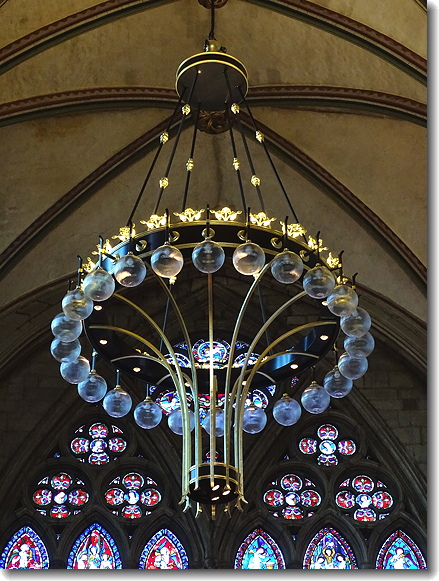 This light illuminates the north transept. 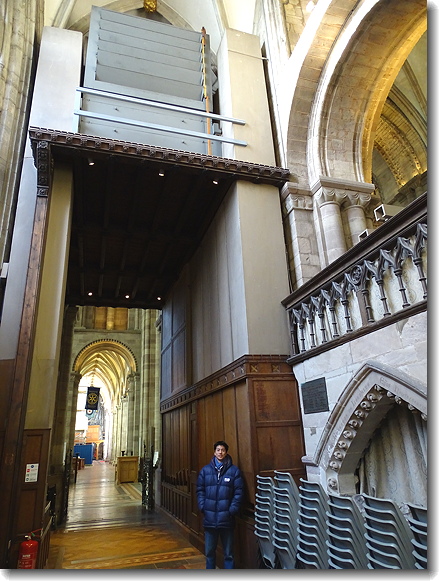 Satoshi is showing the size of the organ pipes. The two immediately behind him are large enough to get inside! 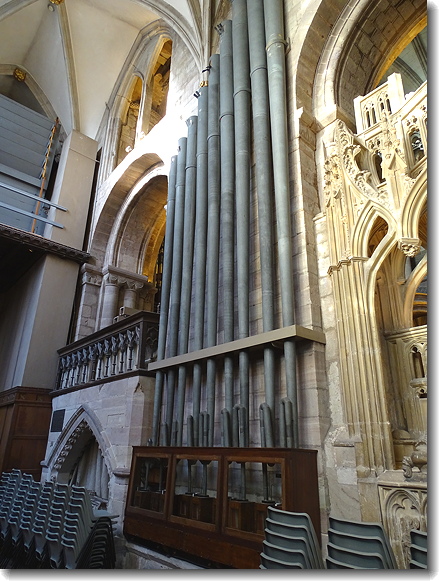 These are some of the reed pipes of the organ. Some organ pipes work like a recorder or flute and some, like these, are more like clarinets and oboes requiring a vibrating reed. 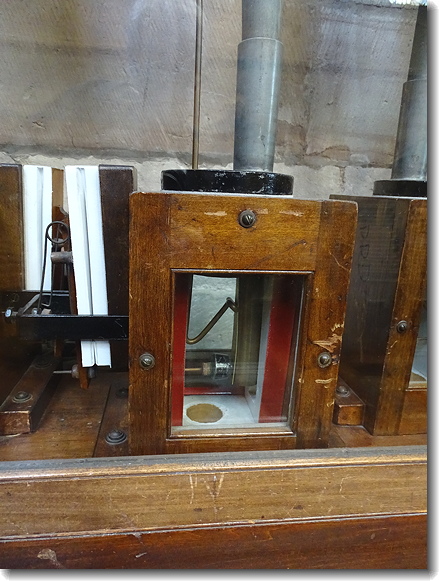 You can see the reeds and associated "bits" here. Confusingly, the organ stops "Trumpet" and "Tuba" are also reeds! 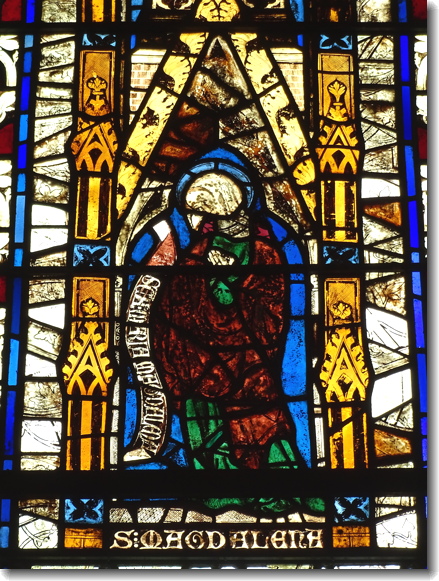 St.Mary Magdalene - considering this window was made in the 1300s, it's in pretty good condition! 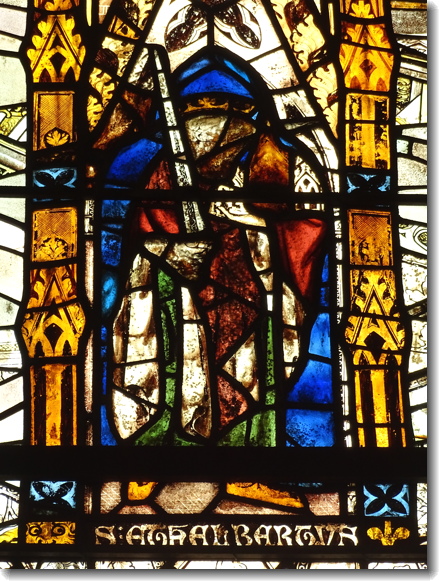 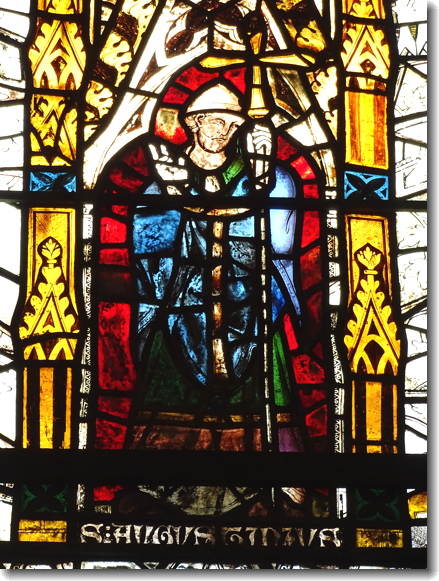 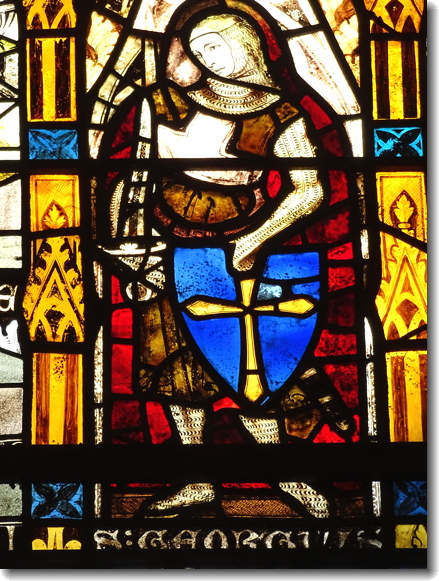 This window of St.George, together with Augustine and Ethelbert above, also date to the 13th century. It is easy to imagine how the peasants of the time must have been in awe of these buildings considering there would have been very little colour in their lives otherwise (as well as the sheer size!) 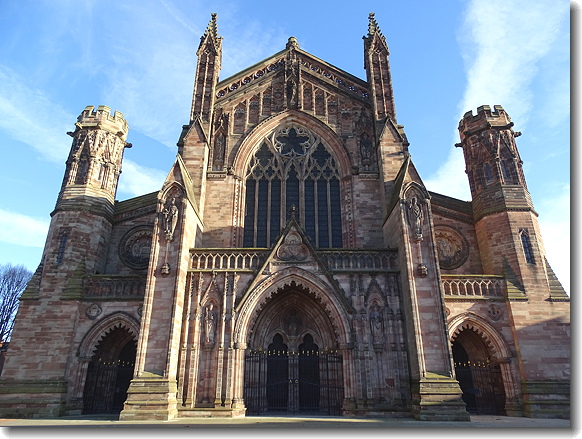 The west front of Hereford Cathedral. When we emerged from the Service, it was sunny once again! 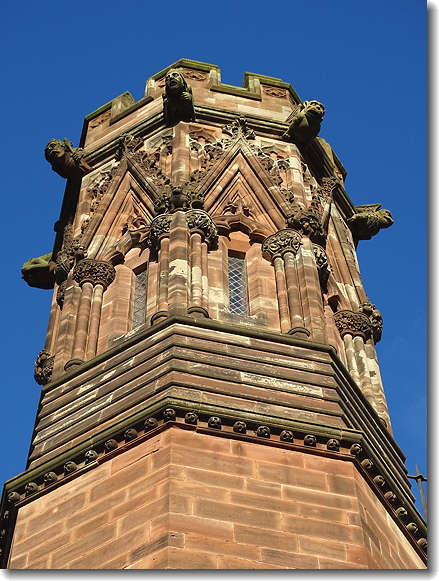 Detail of the above 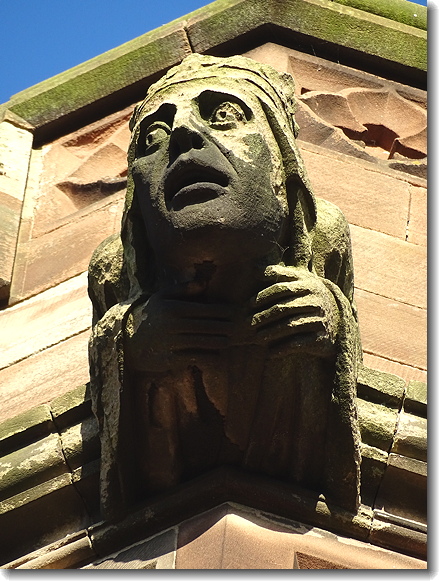 Detail of the detail above.

We drove to Gloucester, just in time for Evensong at 3:00pm. The introit was the Advent antiphon O Wisdom by Harrold. The responses were by Radcliffe, the canticles were Murrill in E, and the anthem was A Song of the Angels by L’Estrange. The organ voluntary was Jésus accepte la souffrance by Messiaen. I can't say that it's a favourite of mine. What do you think?

Following on almost immediately from Evensong was a performance of Britten’s Ceremony of Carols sung by the boys of the Cathedral Choir with Eluned Pierce playing the harp. This was a well-attended, free concert. The boys sang without music, include the several soloists and it was an excellent performance.

Half an hour later there was a service of Compline at 5:00pm in the Lady Chapel. The men of the choir sang this service. The music included Te lucis ante terminum by Lassus and the Nunc Dimittis, by Josquin. Again, only a few people attended. It was bitterly cold as the heaters were not working. Satoshi said being in the Lady Chapel was like being in an igloo (I thought it was colder - igloos are, apparently, quite warm!). Each member of the congregation had a candle and there was very minimal use of electric light. The chanting was in perfect unison and seemingly faultless.

After a quick dinner at McDonald's, it was time for home.