Today, we went to St.Paul's Cathedral for the 11:30am Choral Eucharist. We arrived early enough to hear the last bit of Matins. The Choral Eucharist was in the Nave and we managed to get very good seats fairly close the the choir. We were surprised at how well attended the service was - several hundred. Only the boys of the choir were present. The setting for the service was Britten's Missa Brevis and the communion motet was Mendelssohn's Veni Domine. The organ voluntary was the Overture to St.Paul by Mendelssohn (arranged by W.T.Best). All music was beautifully performed. 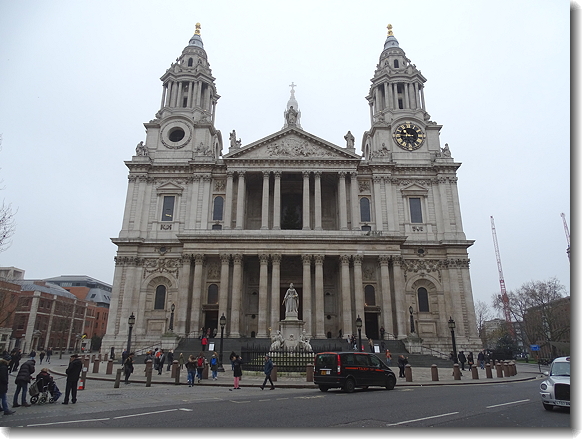 Satoshi had been wanting to go to Selfridge's (department store) so we headed off there for lunch. Of course, as it was the week before Christmas, it was VERY crowded! On arrival, we asked where we could eat and were directed to the food hall. We found a small place with very limited range and, as this seemed to be the only choice, we ate there. The food was only "OK" and the price was not. After lunch, we found that the actual restaurant was on another floor!

Then it was back to St.Paul's Cathedral for Evensong at 3:15pm. We knew that this service was to end "with the Blessing of the Crib and Lighting of the Christmas Trees". What we did not expect was the crowd of people attending! Fortunately, we arrived early but still had to wait in line. They are very security conscious at St.Paul's and, as with each time we visited, all bags were searched. Once again, we were lucky enough to get very good seats. We could not believe that the Cathedral was packed full! Although the stated capacity of St.Paul's is 3,500, I doubt that they had that many seats out. All the same, there must have been 2,000 people at least! So, attendance at Evensong at Cathedral services during our stay ranged from 2 (just Satoshi and me) to 2,000!! The music included the canticles set by Dyson in F, Bruckner's Ave Maria and Silent Night arranged by Barry Rose. Photography is usually prohibited at St.Paul's but, at the end of the Service, so many phones appeared that they gave up trying to police this policy. Unfortunately, I did not have my camera with me, but I did have my phone so I took a short movie and the photograph below on the way out. 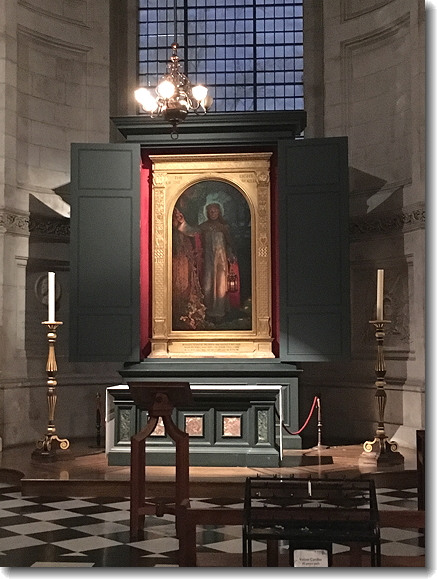 This is the "other" original of the famous painting by Holman Hunt. Revisit 12th November for my comments about it.

It being a Sunday night, there was no theatre performance to attend so we had a early night (which was quite welcome really!)