In England, people seem to like to have the heating set at a much higher temperature than in Australia. Our room was like a sauna. It was a "feet out" night for me even though I had the window open to try to cool the room down a bit!

As our checkout time was 11:00am, we decided to have a bit of a relaxing morning. Our accommodation was near a very large roundabout. Alongside it were several shops which were open 24/7 for people using the freeway.

We had breakfast at "Ed's Easy Diner". The waitress was very apologetic that they didn't have any bacon. I got an extra egg, some toast and some baked beans all for free to make up for the lack of bacon! Everything was very tasty and quite cheap. Ed's Easy Diner is another chain so we will look out for others during our travels. 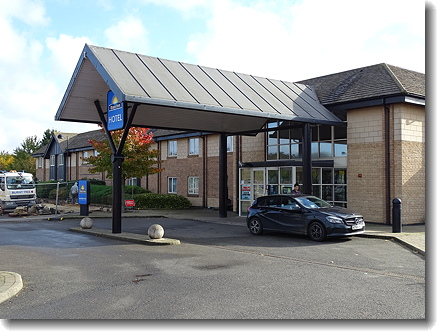 Our first stop today was Wicken Fen Nature Reserve. The National Trust bought the first 200 acres in 1899 (it was only their 5th place ever!). A fen is like a swamp. The whole area around Ely Cathedral was very swampy until it was drained for farmland from the 17th century. Only 0.1% of the original fens remain now and this small area is very important for wildlife. 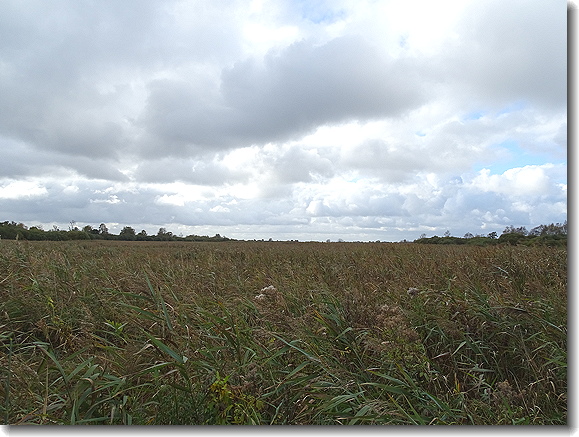 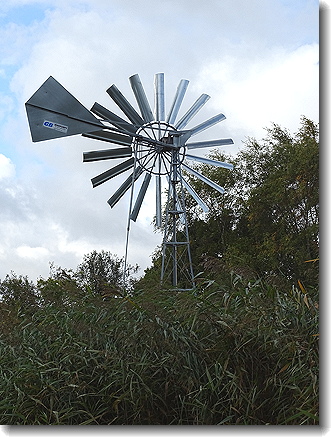 This windmill pumps water into the fen. Because the surrounding areas have all been drained, Wicken Fen is actually above the ground level of the land around it, thus the need for pumping water into it. 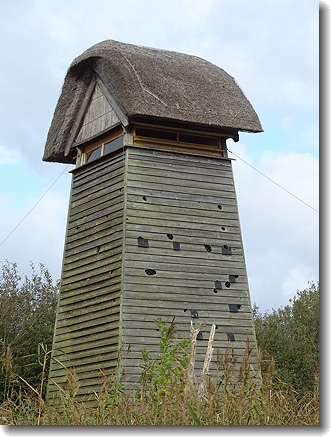 A bird hide - note the thatched roof and the holes in the wall. The holes have been made by overzealous woodpeckers! 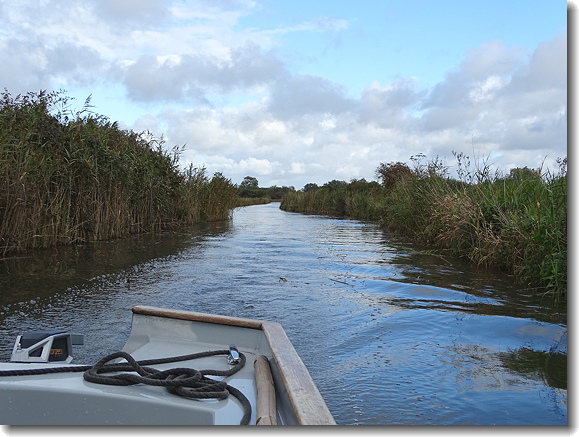 We had a 50 minute boat ride down Wicken Lode. As the boat had an electric engine, it was very peaceful. We saw a couple of birds of prey and a kingfisher during the trip. 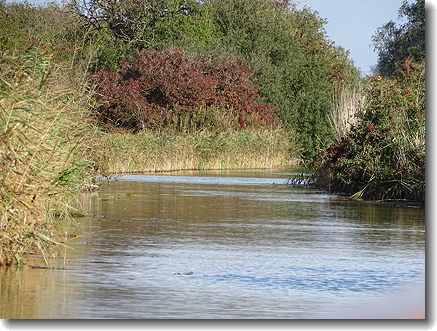 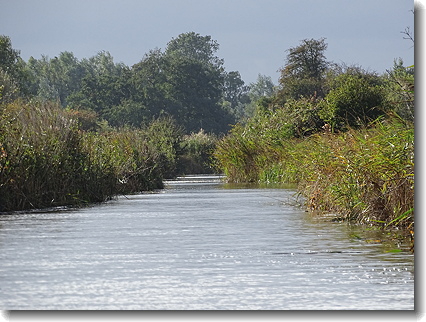 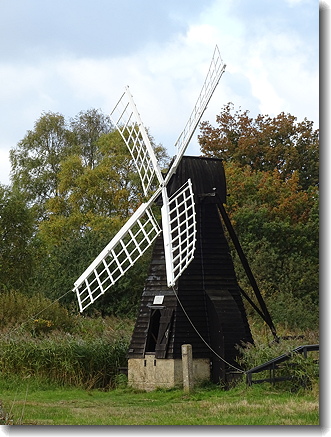 This windmill is the last of thousands that were used to drain the water from the fens. 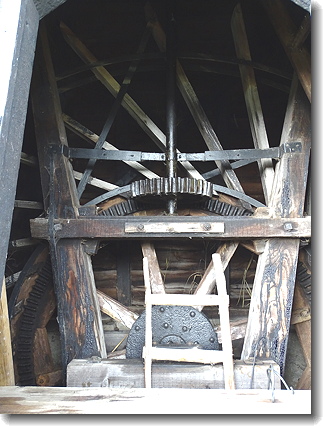 It was moved to this site in 1956 and is still operable. 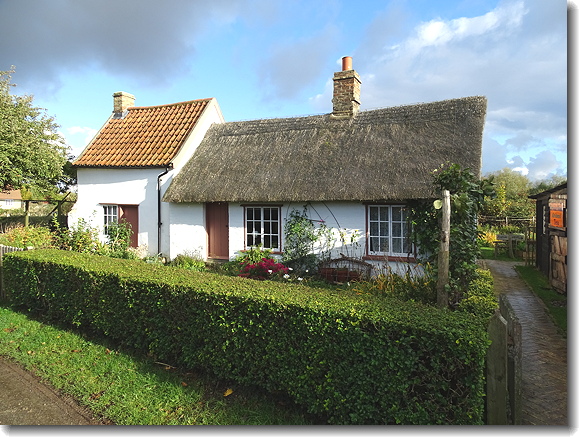 The quaint Fen Cottage was built in stages from the 18th to early 20th centuries. People lived in it until 1972! It was purchased by the National Trust in 1974 and restored in 1988. 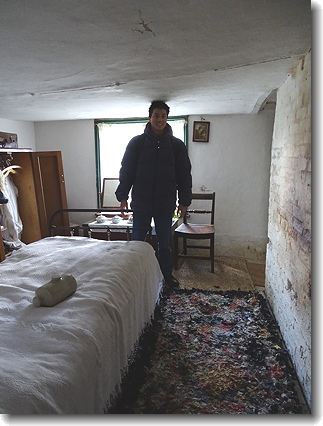 We hoped that the people were not very tall 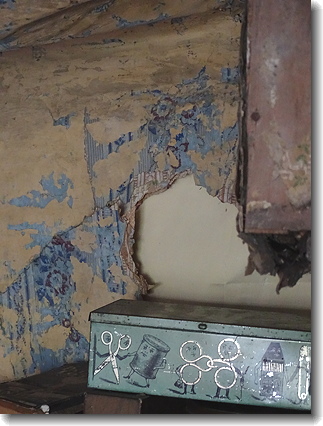 This is the inside of a cupboard in the kitchen which had been lines with wallpaper eighteen times over the years! 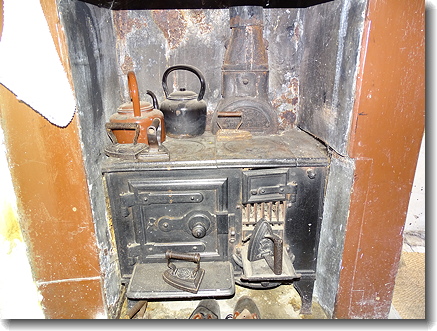 I bet some delicious bread (amongst other meals) came out of this oven. 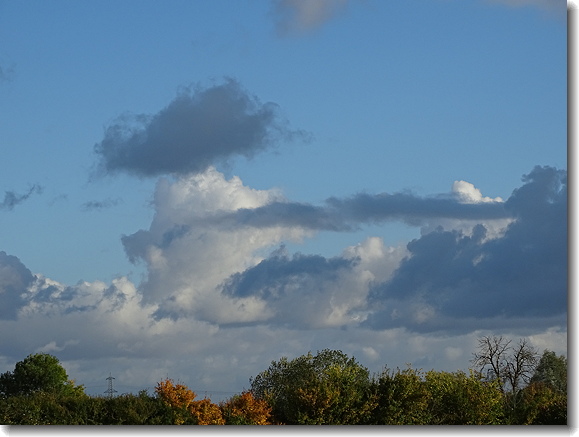 The clouds in England seem a little different to those in Australia. There are often dark and light clouds together here.

Our next stop was Ely Cathedral. We arrived only a little while before Evensong so we did not have time to take as many photos as I would have liked but we planned to go again in the morning. 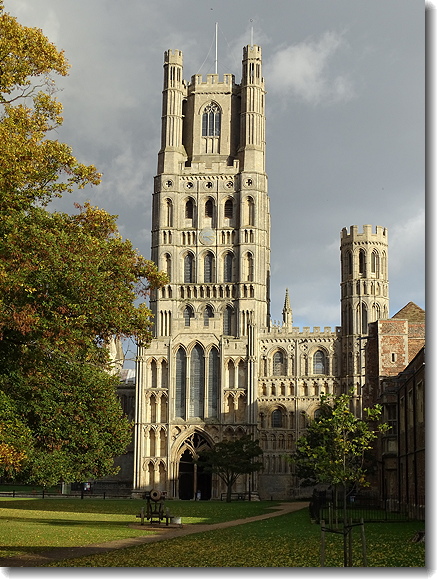 The sun was a just right for this photo! 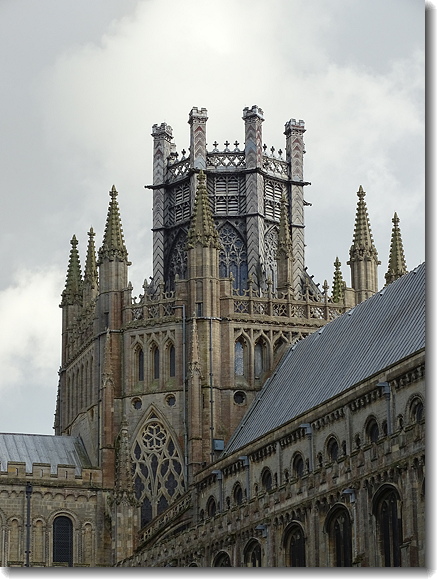 This octagonal tower, called a lantern tower, is one of the most famous features of the cathedral. It was built in the 1300s after the previous tower fell. It is held up with beams of oak. 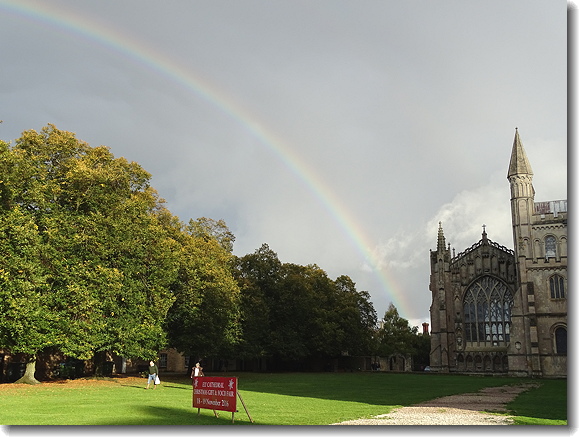 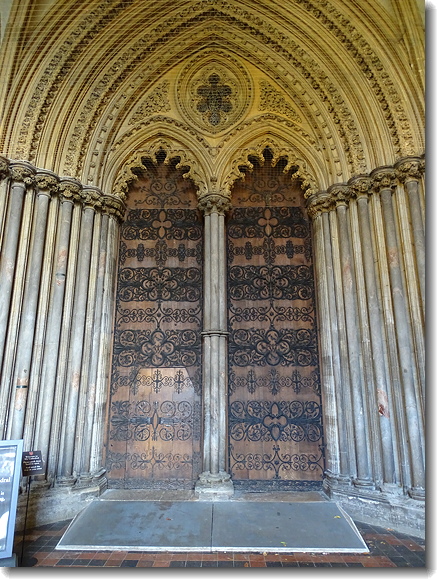 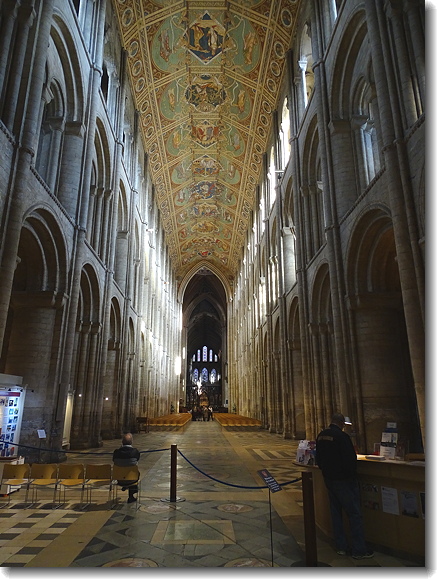 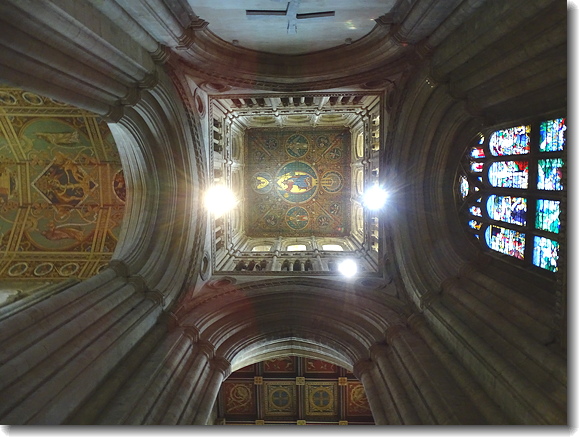 Looking up into the West Tower. 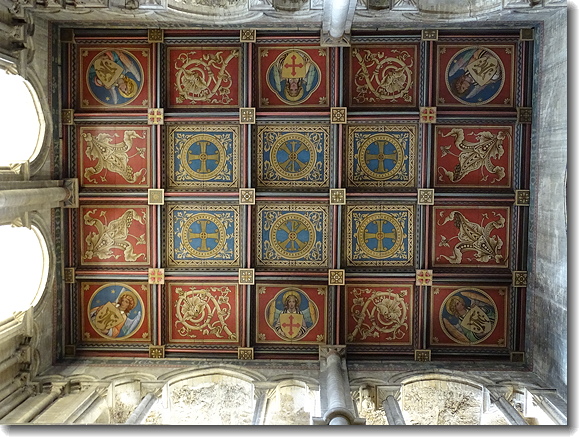 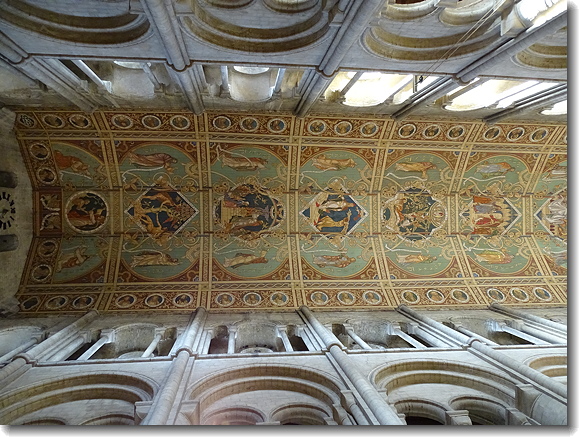 The Nave ceiling is painted and each bay is different. 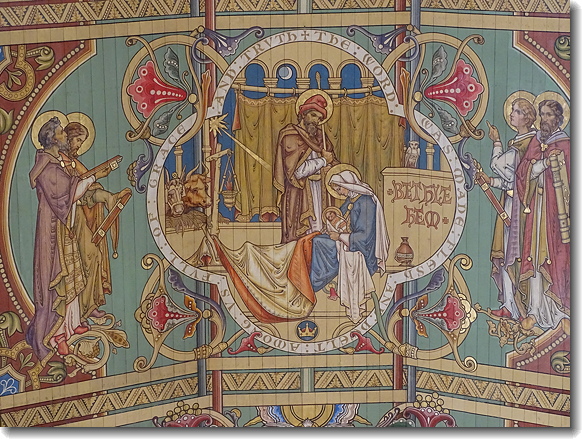 One of the bays in the ceiling 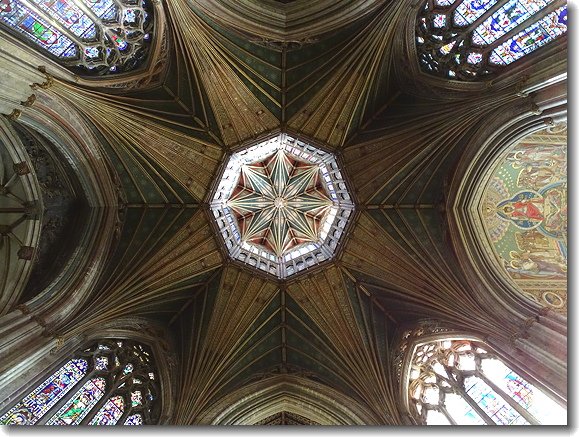 Looking up into the Lantern Tower 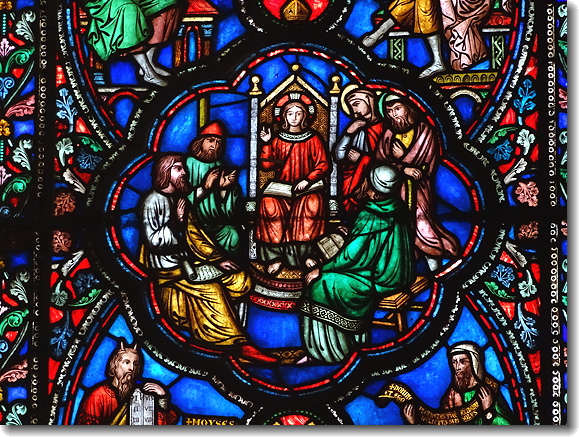 Ely Cathedral has much fine stained glass dating from medieval times to the present. 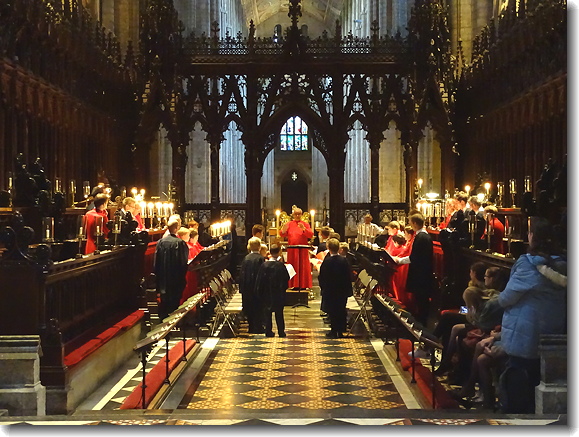 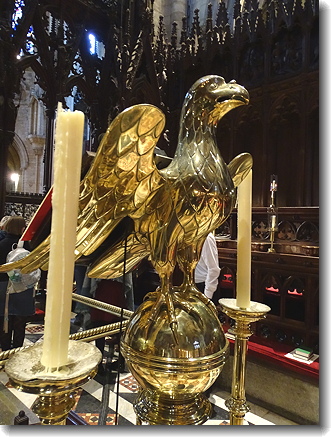 The lectern in the Quire

Evensong was sung by the Cathedral Choir with the Gorcum Boys’ Choir - who, in their academic gowns and ties, looked like a lot of Harry Potters! The music for the canticles was Dyson in F and the anthem was Blessed be the God and Father by Samuel Sebastian Wesley. It was interesting listening to the choir rehearse before the service as I have conducted this anthem several times and the choir needed to go over exactly the same parts that my choir found difficult! Once again, attending Evensong was very uplifting and a peaceful end to another busy day!

We had dinner in the Village Inn where we stayed for the night. We both had chicken with a stilton and leek sauce - very tasty and filling - no room for dessert!