It is almost impossible to believe that this is the 30th day of the trip, it feels like about two weeks! Today we travelled from our accommodation in Old Windsor to Guildford. We stopped at Windsor in order to go to Windsor Castle - the oldest and largest inhabited castle. 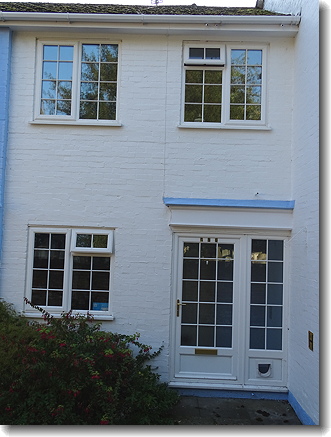 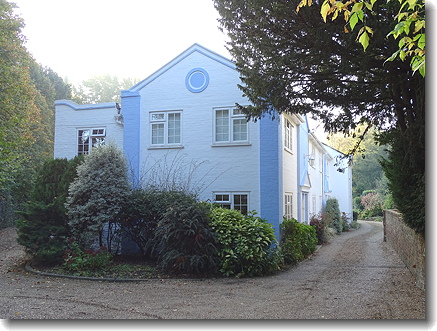 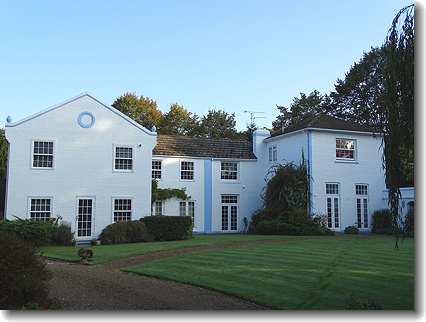 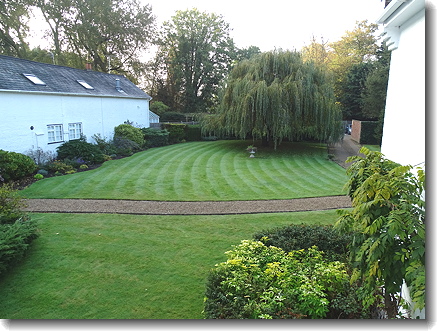 I loved how the grass had been mowed to create the pattern, and the lovely old willow tree. 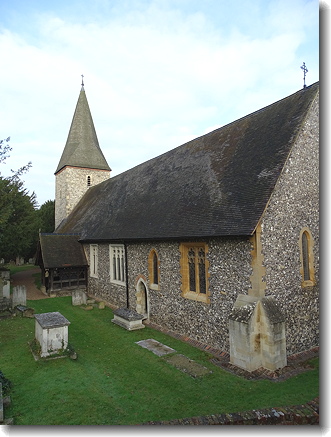 This was the view from my bedroom window! It is St.Peter's and St.Paul's Church, Old Windsor 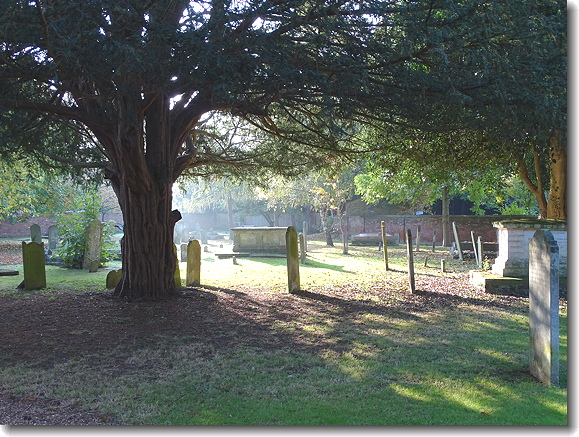 What a lovely, peaceful graveyard! Sadly, the church was not open yet and we couldn't wait. 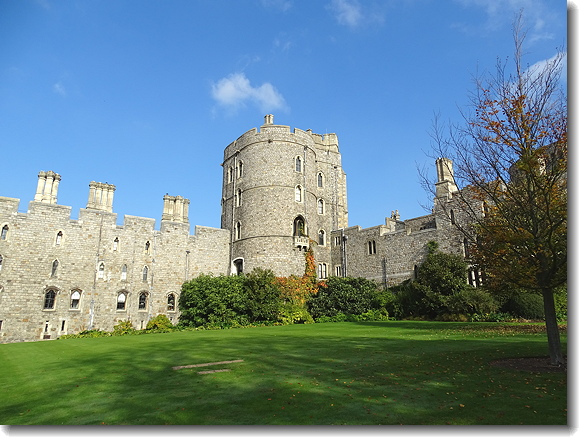 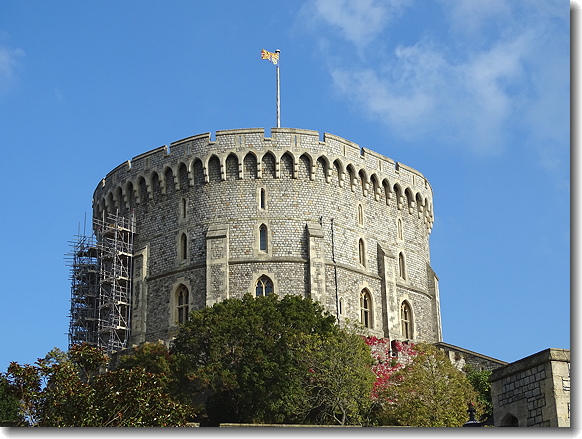 The Round Tower was the central keep of the castle. 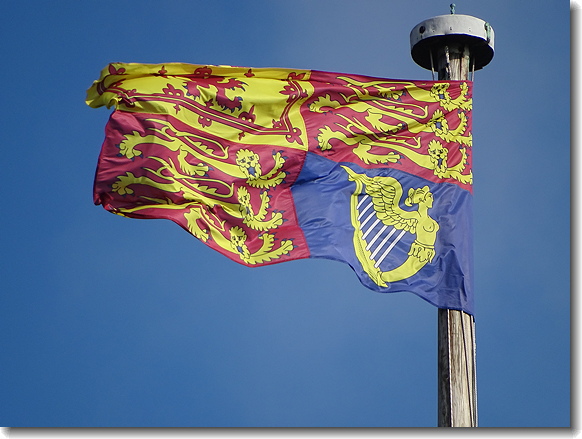 The Royal Standard was flying above the castle, indicating that the Queen was there. Of course I wondered if she was in the parlour, eating bread and honey! 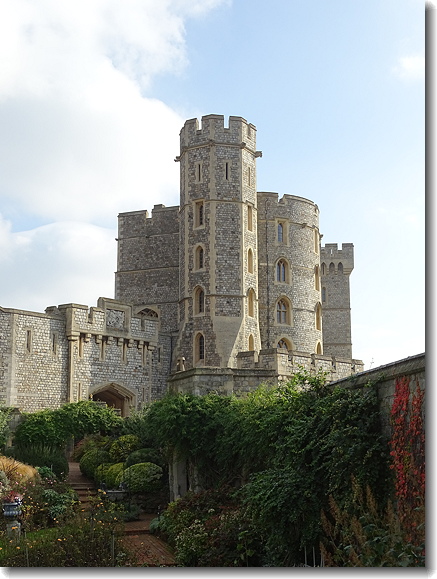 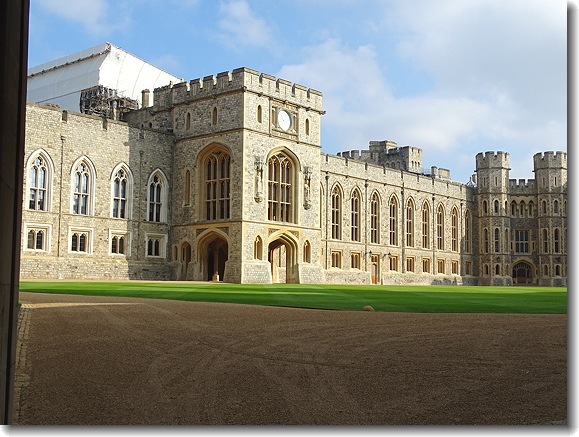 This lawn was where there was jousting from the 1300s until after Henry VIII. 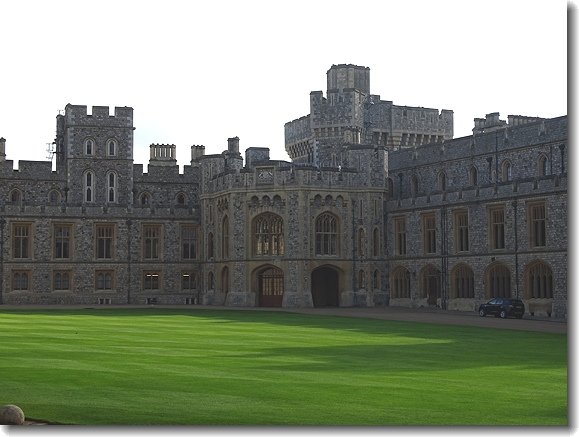 The room with the larger windows on the first floor is known as the Oak Room. It, and the tower behind it, form part of the private apartments of the Queen. Edward VIII's abdication speech was recorded in the Oak Room. 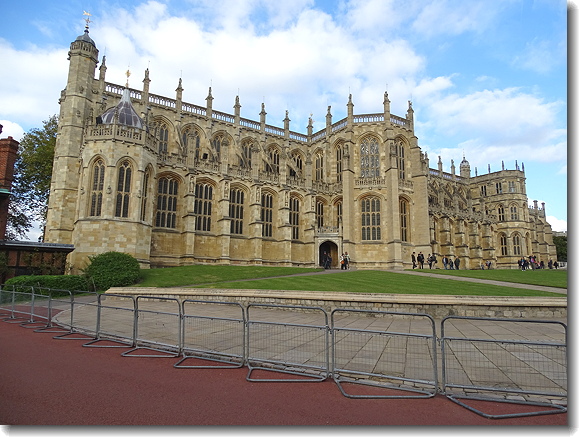 This is St.George's Chapel, within the walls of the Castle. We had planned on attending Mattins there but didn't make it in time, so we went to the Sung Eucharist at 12:00pm instead. Because of half-term holiday, the resident choir was not present. The music was sung by the London Chamber Choir which did an excellent job of singing the Fleming "Missa Brevis" and Villette's "O Salutaris Hostia". 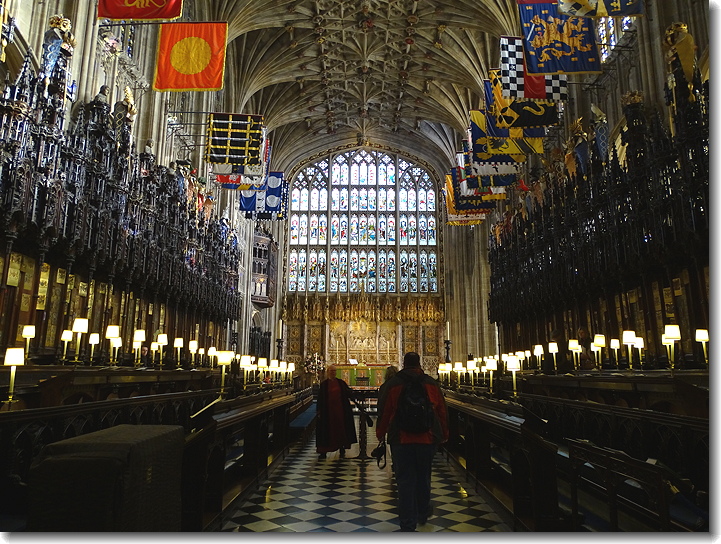 After taking this photo, I learned very quickly that photos are not allowed in the Chapel! 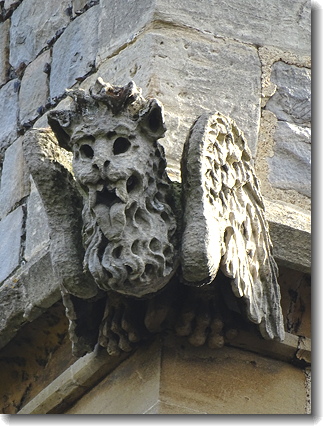 An old gargoyle and... 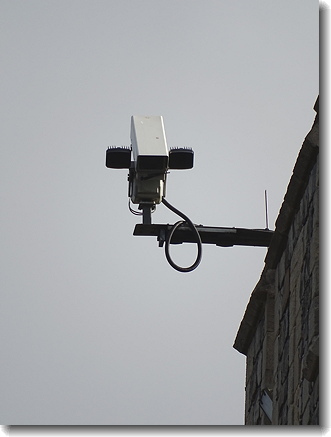 ...a new one! Both are designed to do the same thing really.

Frustratingly, photography is not allowed inside the castle. Almost as soon as we got our ticket to gain entry, we (everyone) was put through the same sort of security as at an airport (everything out of pockets, belt off, walk through the frame). The State Apartments are superb - all the more considering many of them were destroyed in a fire in 1992. I remembered a pipe organ between St.George's Hall and another room and was sad to learn that it had been completely destroyed in the fire and had not been replaced. The history of the castle and the fire and subsequent reconstruction make interesting reading. 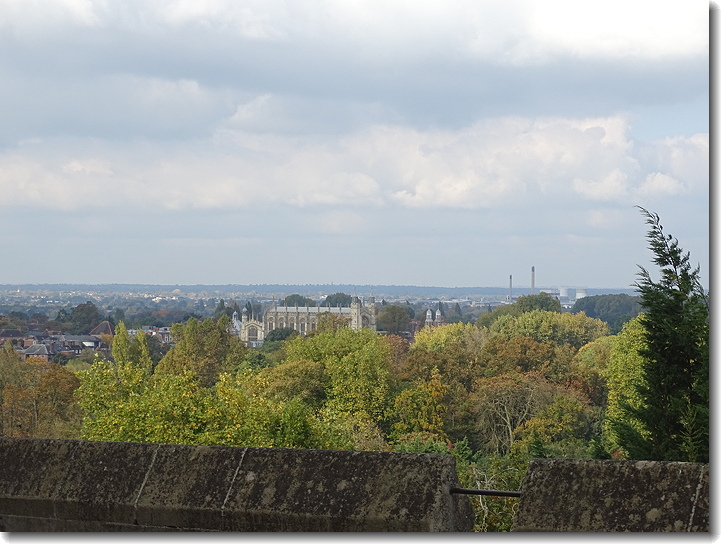 The view from the North Terrace. The church-like building is the chapel of Eton College. 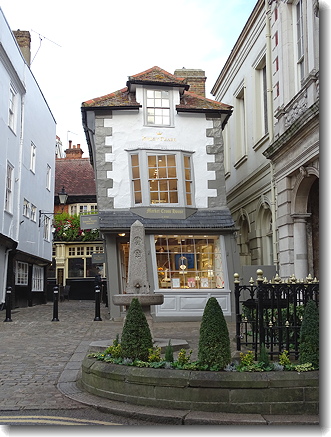 This "crooked house" was built about 1718 and is in the town of Windsor. 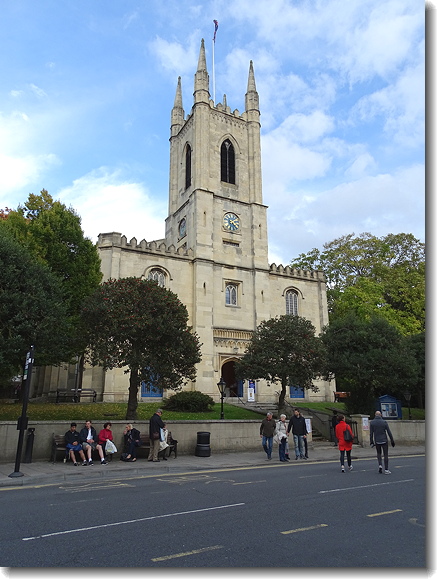 Windsor Parish Church (in the town) 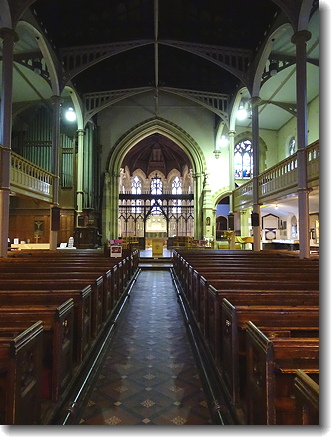 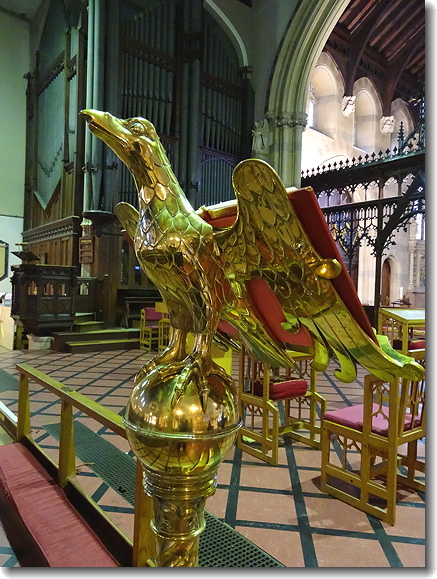 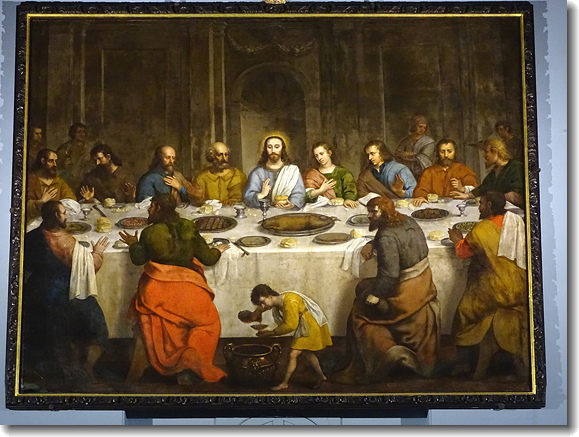 Music is often an important theme in the artwork of Cathedrals and Churches. The angels below are busy holding up the roof and playing musical instruments as well! 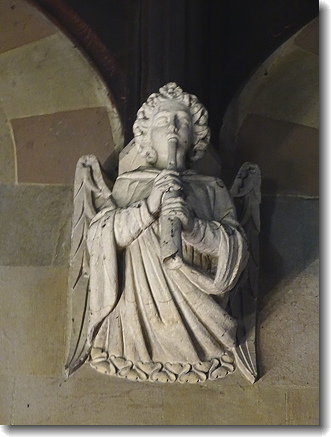 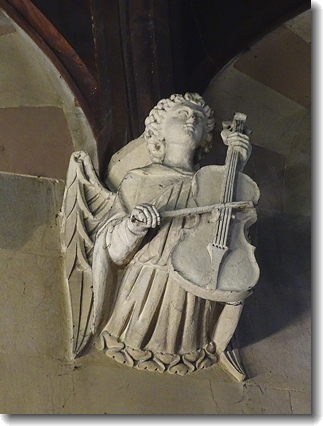 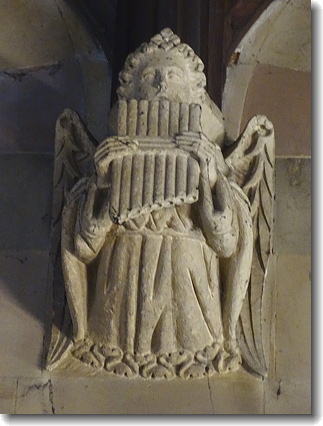 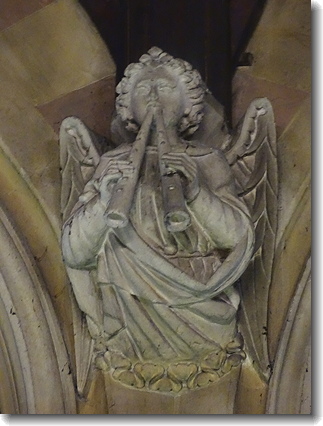 There's always somebody who tries to be smarter than everyone else! 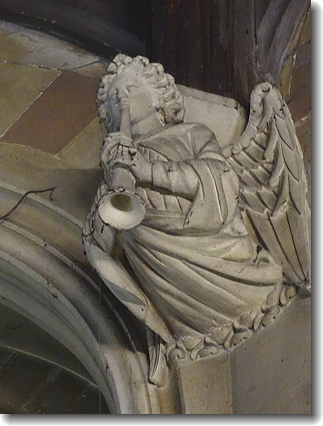 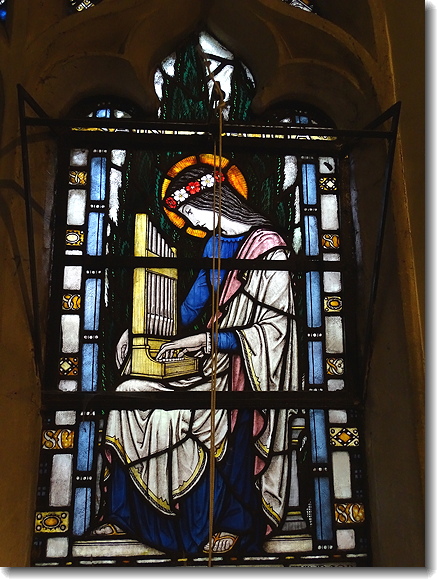 St.Cecilia is the patron saint of music. 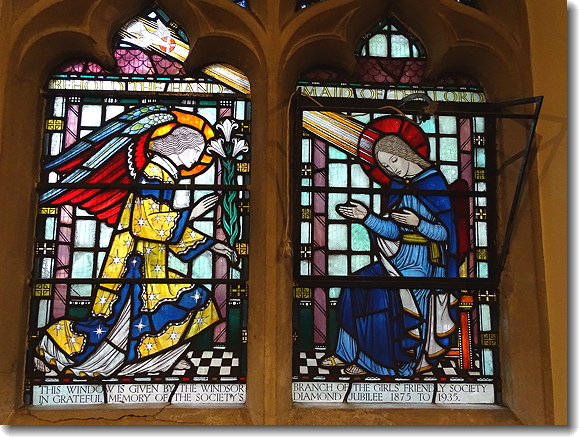 Another theme often shown in windows is the Annunciation. In this interpretation, Mary seems far more calm and accepting of the news from the Angel Gabriel. 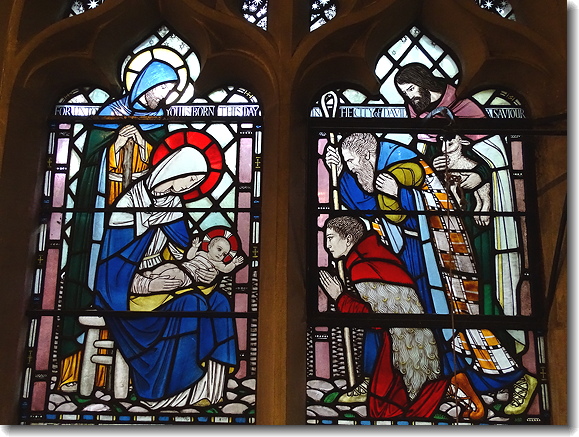 We then headed off to Guildford Cathedral for Evensong. We were disappointed to find that the cathedral (a modern building completed in 1961) is presently a building site. Apparently, the ceiling contains asbestos and it is all being removed at enormous expense. The work, which has been going on since August last year, has included removing the entire pipe organ and almost everything else. Not an ideal time to visit!

Once again, the resident choir was not singing. The Service was sung by the University of London Church Choir. The music included the Responses by Smith of Durham, Stanford in C setting of the canticles, and the anthem To you, O Lord, I lift up my soul by Howard Skempton. The Organ Voluntary (played on the temporary electronic organ) was Fantasia and Toccata in D minor by Charles Villiers Stanford. All the music was performed to a very high standard.